- That’s Uncle Sam. He forgets everything!

5. -Guess what? The university has accepted my application!

7. –Can you tell me when the Boeing 737 MAX planes will be allowed to fly again, sir?

9. –The local food may taste a bit strange.

-Nothing. Just leave me alone.

A. how much it will cost.

B. how long it will take us

C. how much will it cost

D. how long will it take us

12. –Why can’t you trust me? Not everything you heard is true?

A. out of sight, out of mind

B. there is no smoke without fire

C. a miss is as good as a mile

14. –The actor says he’ll celebrate his 28th birthday next week. His fans…

B. Sure he will

The teacher sent me home with a note for my mother that said I needed to visit the eye doctor because I failed the vision test. The trip home that day was very slow.

My mother said it would all be just fine. "It wouldn’t hurt a bit," she said. But I wasn’t worried about pain-I was worried about looking 15 .

The next day, my mother pulled me to the eye doctor’s office. I 16 a set of frames (镜框) and tried to believe my mother when she said they looked really 17 on me. The doctor said the glasses would be ready soon. But I wasn’t ready at all, and I didn’t think I ever would be.

When the glasses arrived, the eye doctor put them on my face and walked me out onto the sidewalk in front of his office. When I looked 18 from my shoes, I found myself in a whole new world –a world filled with 19 pictures, bright colours, and fine detail everywhere I looked. Suddenly I 20 the beautiful outline of red leaves on trees. I could see the details of people’s faces long before they were standing in front of me. I could see my mother 21 as she watched me see the world in a whole new way.

The Monday morning came, and I had to 23 the kids in my classroom. And it happened, just like I feared it would be. A mean kid pointed at me in the middle of the maths class and shouted, "Four 24 ! " But at the same moment, looking through my new glasses, I could see all the way across the room that the kid who had said it had an awfully big nose. 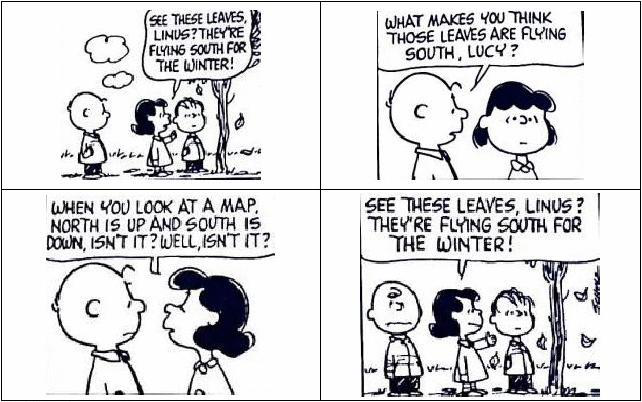 A. a news report

B. a comic strip

26. What are the kids mainly talking about?

Hobbies let you explore interests outside of your line of work. They let you be creative and try all kinds of new things. Picking a different one can get your creative juices flowing again. Look at what interests you.

Check what you love doing in your spare time. Do you enjoy reading books? Maybe you want to try your hand at writing your own. Do you like?a hot coffee at the end of the day? Maybe your hobby could be trying to?make it at home. Turn what you already love into a hobby.

Think about what you value most

Do you value wisdom or courage? Do you admire artists? Let such question guide you when choosing a hobby.

Examine your skills and personality.

If you don't have much patience, then maybe going fishing isn't?something you'd enjoy. However. if you love building things, maybe you?should consider a hobby like working on older cars or building furniture.

Play to your strengths.

Pay attention to what excites your 30 .

The way you talk about things can also show what you really like and it?can be developed into a hobby.

Think about the topics you go on endlessly about. Ask your friends and?family what you seem to talk about all the time. Now think about the?subject that you enjoy so much and decide how it can be turned into?your hobby.

A. a magazine for old people

B. a magazine for young people

C. a picture book for children

D. a picture book for hobbies

A. how to find a new hobby

B. how to give up old hobbies

C. why you must find a new hobby

D. why you must give up old hobbies

Garrison had been treasuring his last piece. All he had left now was a sheet of the beautiful brown paper Pa had brought back from his last sailing trip.

Garrison handed over his sketch. Pa studied it, then looked at his son. "You’re ten now, eh? " Garrison nodded, hoping Pa wouldn’t say that he was too old to be fooling around with pencils and paper.

"When I was ten, I wanted to work on my father’s ship, " Pa said, "When Thomas was ten, he asked me to let him plant the corn. "

Garrison’s throat (嗓子) tightened. "I know I’m not like either of you. " Pa looked at the drawing again.

"No, you are like both of us. You work hard, like Thomas. And you’re like me, too. I have wandering feet, but you have a wandering mind. We need to see things differently.

Garrison frowned. "I’d rather love the land, like Thomas, or the sea…"

Pa patted his hand. "Thomas cares about our family very much-that’s why he’s worked so hard to bring us food. And my love for the sea makes good money. But there’s more in life than food and money. There’s happiness, for one. Does it make you happy to draw? "

"And it makes me happy to look at your drawings. Not many folks can catch happiness on a piece of paper. Some might say drawing’s a waste of time, but they don’t understand how things are. Why, asking you to stop drawing like asking Thomas to stop farming, or me to stop going to sea. It would be like asking us to stop breathing, wouldn’t it? "

Garrison considered this, then replied, "No, sir. Not quite like breathing. If I couldn’t draw any more, it would be… like someone took away my voice. " He hung his head. In his mind he?could hear Thomas laughing, "It’s not like you ever speak up, anyway. "

But Pa patted his shoulder and said, "That would be a pure shame. Your voice is important, Garrison, whether it’s out loud or on paper. And speaking of paper…" Pa smiled. "Take a look in my bag. "

Garrison reached into the bag and found a sketchbook. For a moment he was speechless happiness seemed to fill his body and stick in his throat. Then he managed to find his voice. "Oh, Pa-thank you. "

31. Why did Garrison’s throat tighten?

A. Because he felt thirsty.

B. Because he felt very scared.

C. Because he knew he was not like Pa or Thomas.

D. Because he thought Pa would stop him drawing.

33. What can we infer from the passage about Garrison?

A. He lived in a big wealthy family.

B. He was his father’s favourite son.

C. He would go on with his drawing.

D. He would learn to work on the farm.

In 1845, a deadly disease struck the farms of Ireland, killing all the Lumper potato plants. In another place or time, the death of single crop species (物种) might not have been so important. But in Ireland, in 1845, people depended almost solely on the patato for food. The death of one species caused a terrible famine(饥荒). Now, some scientists are worried that such a famine could happen again, but on a much wider scale.

Over the centuries, farmers have discovered thousands of different species of food crops. Each species has special qualities. Some can be grown in very hot or cold climates. Others are not affected by certain diseases. However, you won’t find many of these species in your local supermarket. To feed the seven billion people on Earth, most farmers today are growing only species of plants and farming only species of animals that are easy to produce in large numbers.

For example, in the Philippines, there were once thousands of varieties of rice: now fewer than 100 are grown there. In China, 90 percent of the wheat varieties grown just a century ago have disappeared. Scientists believe that over the past century, we have allowed more than half of the world’s food varieties to disappear.

One solution to this problem is to collect and store the seeds (种子) as many different plant varieties as we can before they disappear. The idea was first suggested by Russian scientist Nikolay Vavilov. In the 1920s and 1930s, he collected around 400,000 seeds from five contients. More recently, others are continuing the work he began.

In the U.S. state of Iowa, Diane Ott Whealy wanted to protect?historic plant varieties, like the seeds her great –grandfather brought?to the U.S. from Germany more than a hundred years ago. She and her?husband started a place called Heritage Farm, where people can store?and trade seeds.

More importantly, the people at Heritage Farm don’t just store the seeds; they plant them. By doing this, they are reintroducing foods into the marketplace that haven’t been grown for years. These food species are not just special in terms of appearance or taste. They also offer farmers?food solutions for the future, from the past.

34. What is this passage mainly about?

A. The need to protect different food species.

B. How to increase the number of food species.

C. The fact that many food species are dying out.

D. How to prevent food species from disappearing.

35. Why are some scientists worried that such a famine could happen again?

A. Because people depend on certain species of food crops.

B. Because the same deadly disease may attack crops again.

C. Because the world’s population is larger than that in 1845.

D. Because farmers grow the same potatoes as those in the past.

Meanwhile, thousands of other species are dying out.

37. What can we learn from the passage?

A. The disease spread very quickly and killed thousands of people in Ireland.

B. Around 80 percent of the rice varieties in the Philippines have disappeared.

C. People have been storing seeds to save plane varieties for less than 100 years.

D. Heritage Farm is the first place in the U.S. for people to store and trade seeds.

act on. That’s who we really are.

Britons are well known for drinking tea. The average (典型的) person in the UK drinks around 1.9 kg of tea every year. That’s around 876 cups of tea. Tea is drunk by all levels of society. But tea does not grow in Britain. Most tea grows in India and China. So, how did it become an important part of British culture?

Tea arrived in London in the 1600s. At this time, British ships were exploring the world and came across the drink in China. It was not long before green tea could be bought from the market. However, it was only for the rich people.

At the beginning of the 1700s, the amount（数量）of tea arriving in Britain increased rapidly . Black tea arrived at this time. At first this tea served exactly as it was in China. They soon discovered that it mixed really well with a little milk and sugar, giving the drink a special British colour.

In the 1800s, tea was still a product enjoyed only by people with money. At this time they began to have “afternoon tea”. They drank tea with a snack around 4 pm to avoid feeling hungry between lunch and dinner. It is a still going today but has become less popular in recent times.

57.you should think twice

60. took up three fourths / quarters of

61. special offer canceled because of safety

62.how long the robot had been out of control