1. How did the girl go to school today?

2. What will Peter do on Sunday afternoon?

B. Have a piano lesson.

3. When will the train leave?

4. What does the boy think of the movie?

5. Where does the conversation probably take place?

6. Why did Jack have a bad sleep at night?

A. He was nervous before exams.

B. His neighbors kept making noise.

C. He was coughing the whole night.

7. What did Mrs. Black advise Jack to do?

A. Take some medicine.

B. Have a walk with his parents.

C. Ask the community for help.

8. How did Johnson feel at first?

9. Who took part in the speech competition?

10. What is Johnson busy with?

A. Practicing a speech.

B. Having basketball training.

C. Preparing for an art project.

11. Who will give a speech at the first meeting?

12. Where will the meeting be held?

A. In the school hall.

B. In the science lab.

C. In the meeting room.

13. What will the students do at the meeting?

A. Learn about the Black Hole.

B. Make a model plane.

15. Why does the speaker give the message?

A. To encourage students to join the space club.

B. To give advice on how to learn science well.

C. To ask students to visit the science museum.

After school on Friday, I waited at the school gate to walk home with Jemma, as usual. Then I saw __16__ talking and laughing happily with some other girls. She glanced(瞥了一眼) at me and left me alone there. I knew right then that I had __17__ my best friend.

After dinner, Mom asked, “Is Jemma coming by tomorrow?”

I shrugged(耸肩) and said nothing.

Mom took a look at me. Then she said, “Will you take these magazines to Grandma, please?”

Grandma welcomed me at the door with a warm hug.

Sitting on the sofa, I noticed a (an) __22__ of kids in old-fashioned clothes on the table. Grandma pointed at a girl with short fair hair.

“Beth and I were best friends in school. We did everything __24__. Then one day, she made new friends and said she didn’t want to hang out wit h me anymore. Nothing hurt __25__ that.”

As I was heading home, that new girl appeared again. I went towards her and spoke, “Hello.”

International Museum Day is coming. Here are some special museums that you must see. 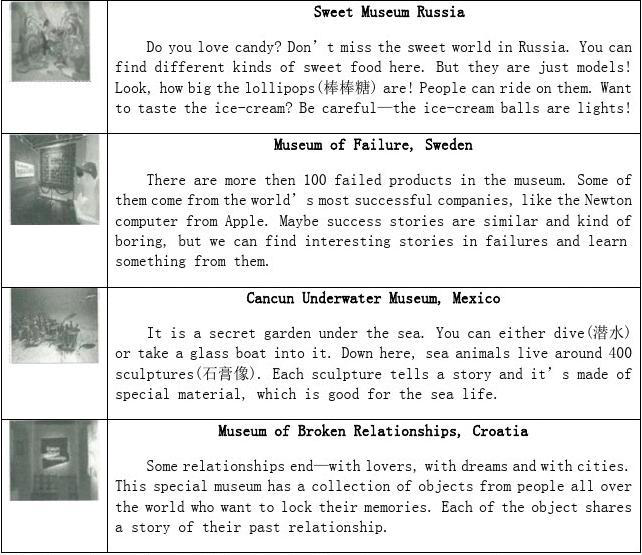 32. According to the passage, which of the following is TRUE?

A. People can taste the candies on show in Sweet Museum.

B. People learn about success stories in Museum of Failure.

C. Objects in Museum Of Broken Relationships have their stories.

D. The material of sculptures in Cancun Underwater Museum is harmful.

It was Day 1 of our va cation on Cortes, a beautiful quiet island. “iPhone, iPhone, iPhone,” my son kept moaning(呻吟). In front of him was a big window of facing the blue ocean. And a cool gentle wind was coming in from the door. Clearly, he saw and felt none of it.

Back at home, I’d soon give up and hand the phone over to him after five minutes of listening to this kind of moaning.

But not here. Before we left, I had told my 10-year-old-old son the rule—no e-mails, no Facebook, no video games, and no iPhone. We came here to get away from them all. Here we were on our first day and already, he couldn’t stand it.

6-year-old-old daughter and my husband were drawing on pieces of wood. They were doing just fine.

On Day 2, we spent the whole morning digging for shells(贝壳). This time, my son joined us. He collected shellfish and other sea treasures. When we got back to our little wood house. I gave my son a book, and put him on the lovely garden chair. It almost dinner when he looked up.

The next few days passed in peace.

On Day 6, my son was lying beside me on the beach, watching the sun going down. He was playing with the sand. And there was something shining in his eyes. I realized how time slowed down for both of us. It was exactly what I wanted. Finally, we were able to sit quietly without thinking about screens, phone calls and e-mails.

A week away from all the electronics and life is good.

34. What is the special rule for the writer’s vacation?

A. They cou ldn’t use their electronics.

B. They must keep quiet and stay in the house.

C. The had to spend their vacation on an island.

D. They should collect as many shells as possible.

A. I felt really tired and went to bed.

B. I closed the door and stayed with him.

C. I just walked outside to leave him alone.

D. I gave him iPhone and let him stay inside.

A. A Terrible Life on the Island

B. A Special iPhone for My Son

C. A Fight between Mother and Son

D. A Vacation Away from Electronics

In the park, you see a group of people, all looking up at the sky. Without thinking about it, you look upwards, too. Why? In the concert, someone begins to clap and suddenly the whole room joins in. You do, too. Why?

Sometimes we feel we are acting correctly when we do the same as others. The more people follow an idea, the better or truer we think the idea is. It’s the social proof(社会认同感) that works.

The scientist Asch carried out an experiment. It shows how social proof can influence us. In a room, a man is shown Line 1, and next to it are three lines(A, B, C). A is longer, C is shorter and B is as long as Line 1. He must tell which of the three lines is as long as Line 1. When the man is alone, he gives the correct answer B. Then, five other man enter the room, and each of them gives the answer C as they were told to. Now the man changes his idea and gives the answer C. Asch got the same result many times among different subjects(实验对象).

Why do we act like this? Well, in the past, following others was a way to keep away from danger. Suppose that 5000 years ago you were hunting(打猎) with friends. Suddenly, they all ran away. What would you have done? Would you have stayed? No, you would have run, too. We are descendants(后代) of those who copied others’ action. It is so deeply planted in our mind that we still use it now.

Social proof has special power. The advertising industry, for example, often makes use of it. So be careful whenever a company says its product is “the most popular”.

A. telling a story

A. following others is always right

C. it’s difficult to carry out the experiment

D. people can study better if they are alone

A. running with others

B. hunting with friends

A. it’s important to run with others anytime

B. products in the advertisement are the best

C. we mustn’t copy others’ action to keep safe

D. we need to think twice before following others

On March 19，2019， eight-year-old Tani won the New York Championship(纽约象棋冠军赛) of his age group. But the boy, who was homeless at the time, began learning the game less than a year ago.

Tani and his family arrived in New York City from Africa in 2017. A church helped him enter the primary school, P. S. 116. Here the gifted boy was first introduced to chess by a part-time teacher Makofsky, owner of a chess club. Interested in the game, the seven-year-old asked his mother to allow him to join the club. Not able to afford the chess classes, she emailed Makofsky. To her surprise and joy, Makofsky agreed that Tani could learn it for free.

Though the chess club helps, it’s largely believed that Tani’s success lies in hard work. The

boy practices the game for many hours a day on the floor with his board. Every Saturday, Tani goes to a free 3-hour class to improve his game skills.

Not surprisingly, Tani’s story, first reported by The New York Times, has brought him great support from the public. Soon after the young boy won the New York Championship, Makofsky began a GoFundMe activity for Tani and his family so that he could continued his chess journey. It raised $200,000 in just ten days, far more than they expected. And the money keeps coming. But the family donates(捐赠) most of the money to the church and to those poor family!

Tani has also received offers from three famous private schools in New York. However, the family have politely refused all of them and chosen to continue Tani’s education at P. S. 116.

While excited about his new life, Tani is ready to meet great challenges(挑战). He is busy preparing for the 2019 National Primary Championships. Winning the

competition will bring the chess player closer to his dream of becoming the world’s youngest chess grandmaster(大师). The record has been 17 years by the Russian chess player Karjakin, who won the title at the age of 12.

A. where Tani practices chess

B. how bard Tani works at chess

C. what Tani’s mother does for him

D. how much the chess club helps

A. hoped to see Bill Clinton

B. went to a famous private school

D. got much support from society

45. The writer mentions the Russian chess player Karjakin to ____.

A. call on young people to learn chess

B. introduce his great achievements in chess

C. show it’s a big challenge for Tani to realize his dream

47. Spring Festival is celebrated in many ____ countries.

If you are tired of making human connections, Lovet can be a great choice for you. A Japanese company __51__(发明) it in December, 2018. It is a friendly robot which can make __52__(孤独的) people feel the love.

The robot cannot help you with housework, but it will __57__(发展) your ability to love. It moves around on three wheels and waves its two little __58__(手臂) to show surprise and love, or to ask for a hug. it sleeps when it;s hugged and it follows you when it is called. It is __59__(害羞的) around strangers. When you open the door, it will hide __60__(在……后面). If you want to make it laugh, just touch it.

Lovet will do all it can to fill you with joy.

Do you play Ant Forest? It is __61__ online game on Alipay(支付宝). Players __62__(collect) “energy” by doing something environmentally-friendly. They can grow and water __63__(they) own “trees”with the “energy”. __64__ the “trees” are big enough, Alipay with some other companies will plant real trees in the desert(沙漠) area of China. Every year millions of trees __65__(plant) in this way.

This is part of China’s tree-planting program. It hopes __66__(stop) the desert from becoming larger. Since 1978, China has planted over 66 billion trees __67__ the north. It is known as “the Great Green Wall”. For example, Saihanba in Hebei Province was once a desert, __68__ now it has become the biggest man-made forest in China.

“China is making the world much __69__(green) than before. It sets a good example and has many __70__(lesson) to share with the world,” said the United Nations Environment Program.

Brandon Forest Park is a place of interest. This large woodland is home to many birds and other wildlife. It’s open all year round to visitors.

In the center of the park is the Forest Shop and Cafe. You can buy maps in the shop and there are all kinds of gifts and souvenirs on sale as well.

Spring events are held at the park during the summer. There’s going to be an outdoor play, a concert and a horse-riding race this summer.

More information about the park can be found on our website wwwbrandonforestpark. com.

I’m Li Hua from Sunny Hill Middle School in China. I’d like to share my school life with